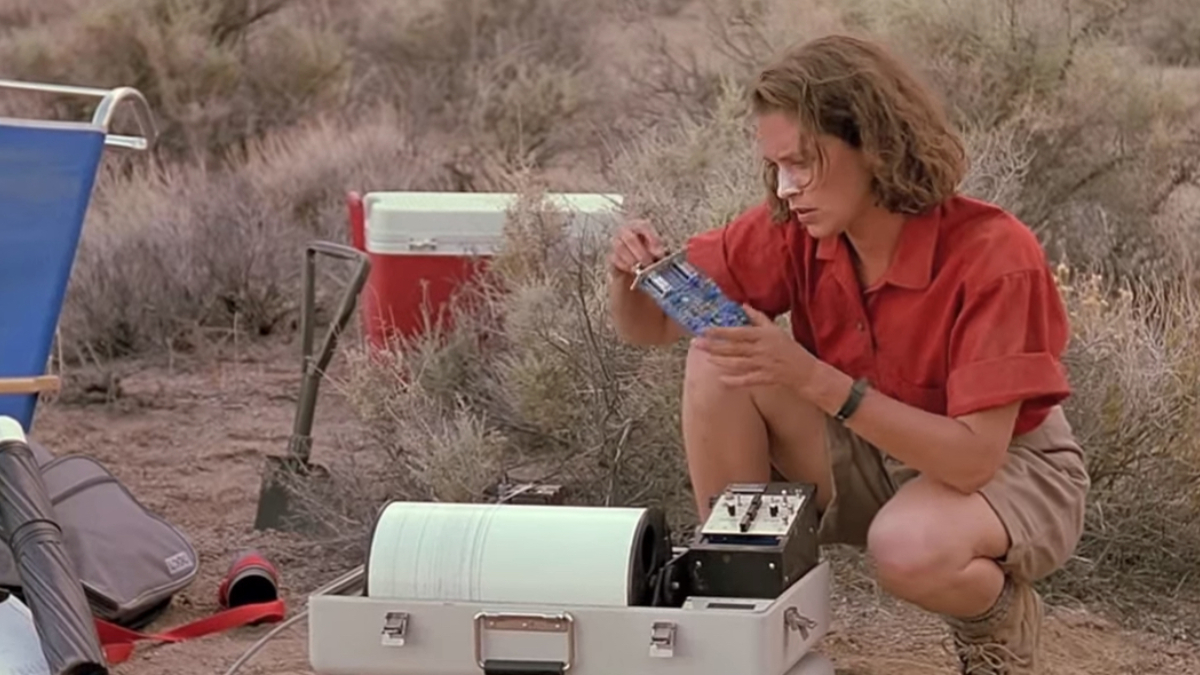 Occupational Hazards is a column that takes a look at the commonly occurring occupations presented in horror film and television, and the key part these jobs play as the story develops.

As a scientist, you’re often required to investigate the unknown, and try and add some logic and reason into the situation. Unfortunately for scientists in horror movies, logic and reason can often be hard to find, and even the most scientific of minds can find themselves struggling for an explanation that makes sense.

However, there are also some scientists who use their extended knowledge of the way the world works to try experiments most of us would argue are a really bad idea, and usually, we’re right.

Having a good knowledge of science may help you get an impressive job, and your sure to be an asset to your pub quiz team, but it doesn’t mean you’ll survive a horror movie! With that in mind, let’s check out some of my favourite horror scientists.

If you go down to the woods today, you’re going to severely piss off the locals. And that’s something Adam and his wife Claire find out the hard way in The Hallows. Adam has relocated his family to the area to study the plants and fungus in the area when he discovers a strange black fungus in the area.

The locals warn Adam that he needs to stay out of the woods unless he wants to disturb the creatures which are rumoured to live within. Initially, Adam and Claire are sceptical, but when the couple finds themselves under attack, there’s only so long they can blame the locals before they admit there is something very wrong in the woods surrounding their home. Soon, they find themselves completely under siege, with Adam stung in the eye by one of the creatures and their baby son is kidnapped and potentially replaced by a changeling.

In Annihilation, Lena is a cellular biologist professor, who decides to be part of the latest expedition into the ‘Shimmer’ after her husband was the only member of the many previous exhibitions to return. Lena and her team are tasked with understanding what the Shimmer actually is, and hopefully returning to pass on their findings to the government team waiting on the other side.

Once inside, however, it becomes very clear why no other expeditions have ever returned from the Shimmer, as there is a range of weird and wonderful creatures waiting for the women on the other side. Quickly, the team find that the Shimmer is using their DNA and distorting it, with terrifying results, including a mutated skeletal bear with the ability to mimic human speech.

To be fair to Dr Susan McCallister, she is trying to do a lot of good with her Alzheimer’s research after she watched the terrible effect the disease had on her father. She plans to use the sharks as part of her study, but when their brains proved too small, Susan decided to increase their brain size to ensure the study is a success. Unfortunately, this creates a group of super-smart sharks who orchestrate an attack on the underground research facility and those inside.

While Susan’s actions undoubtedly put the entire facility in danger, once things go wrong Susan isn’t above killing the sharks in order to ensure she and her fellow team members have a chance to escape. She even ends up making the ultimate sacrifice to ensure the sharks don’t escape the facility and cause havoc in the sea.

Catherine Danforth in Prince of Darkness (1987)

If I was a scientist, and I got asked to come to a church and try and work out what the mysterious tube of green swirling liquid in the basement was up to, I might give it a hard pass. While the team think they are making good progress on understanding the green liquid, they soon find themselves getting possessed one by one. They also end up trapped in the building when a large group of homeless people outside are possessed by the evil force connected to the tube.

Catherine is really the hero of Price of Darkness because she witnesses a possessed Kelly trying to summon the Anti-God through a mirror, and risks her own life by throwing herself and Kelly through the mirror portal to keep the Anti-God trapped on the other side. However, the Priest is a little axe happy and smashes the portal before Catherine has the chance to escape.

Thanks to Rhonda’s seismology equipment, the gang are able to learn more about the creatures and predict when they’re about the strike. Rhonda also risks her life multiple times to help the residents of Perfection destroy the creatures and give them the chance to escape the town they’ve been trapped in.

Dr Sam Grimm works on a research facility on Mars where they have been studying the remains of an ancient race. While not directly involved in the work herself, it turns out that the facility has been experimenting on humans, accidentally creating mutants by using a serum containing the extra chromosome found in the ancient race.

Sam’s brother is sent to the facility to help get rid of the threat, allowing him to reunite with Sam. Sam also works out that the extra chromosome doesn’t always turn everyone into mutants, and has the potential to create super-humans in the correct host. Sam’s breakthrough means that when her brother is injured by a bullet, she is able to save him and give him the extra abilities he needs to defeat the remaining bad guys when she injects him with the serum.

Most science-based horror starts with good intentions. In the case of Dr Zoe McConnell, she and her fiance Dr Frank Walton are trying to perfect a serum that will help coma patients. However, they soon discover it has the power to bring things back from the dead. But after their project is shut down, Zoe and her team decide to sneak back into the lab to get the proof they need that their serum works.

While trying to replicate their experiment, Zoe is electrocuted and dies. Making a decision that Louis Creed would be proud of, Frank decides to use the serum on her, bringing her back to life. Of course, things are never that easy, and the Zoe that comes back is not exactly the same as before. The serum gives Zoe kickass powers, but it also gives her increased rage and a thirst for violence, leading to her killing every member of her team in a range of gruesome ways.

I’ll give it to Herbert West, he’s good at what he does. Right from the get-go, we know that he can bring people back from the dead. However, as is so often the case, he is yet to perfect the art of bringing people back in the same state they were before they died. The people and animals he brings back tend towards violence, and cannot pass for anything other than a murderous member of the undead.

When Herbert moves in with fellow medical student Dan, he quickly makes Dan’s life a nightmare by involving him in his life-reviving experiments. With both Dan and Herbert kicked out of medical school, they decide to break into the school’s morgue and bring a body back to life to prove Herbert’s experiments work. However, that turns out about well as you would expect it to.

The Fly is the ultimate case of science gone wrong with scientist Seth Brundle trying to perfect his teleportation machine by teleporting himself rather than melting another baboon. While the experiment seems to have been a success, Seth soon finds out that a fly snuck into the pods with him, meaning Seth’s DNA is melding with that of the fly.

To begin with, Seth embraces his new life, enjoying an increased sex drive and stamina, and the ability to scuttle along the ceiling of his apartment. But soon he needs to vomit on his food to be able to digest it, his ears fall off, and his flesh starts to melt off his body as the full fly transformation takes hold.

Why not check out more editions of Occupational Hazards here!